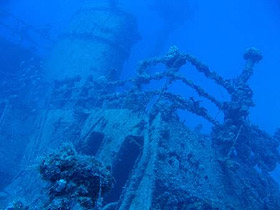 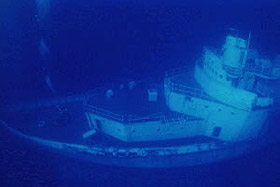 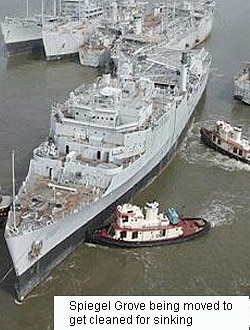 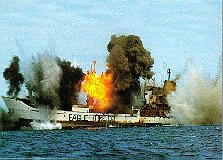 The largest vessel ever intentionally sunk is the USS Spiegel Grove, a 510-foot landing ship dock. To give a better visual understanding of the immensity of this ship, she is roughly equivalent in length to two football fields.

The sinking of the Spiegel Grove is an extraordinary tale. Her sinking was scheduled for Friday, May 17, 2002 at approximately 2:00pm. However, she had a mind of her own and prematurely began to sink, rolled over, and remained upside down for several days with her bow protruding from the water. A salvage team managed to fully sink the vessel three weeks later, but she came to rest on her starboard side rather than keel-up as hoped. Later efforts to right the ship failed despite the best efforts of all involved, including two very determined tugs. Then three years later, much to the surprise of the entire diving community, Hurricane Dennis righted the 510-foot ship with seas over 20 feet and a driving current. She know rests keel-up, fully dignified and ready for new adventures!

The Spiegel Grove is the backbone of the artificial reef system that has formed in this area. Algae, sponges and coral mingle with 130 species of fish to create enormous bio diversity in this region. Divers may see Goliath Grouper, barracuda, large jacks, and a large colony of gobies.

The Speigel Grove is a perfect wreck for CCR training and diving. With it massive superstructure the exploration can seem endless. We like diving this wreck. Our usually CCR profile on this wreck is to do a double dip or what would be considered a two tank dive. Mooring up on one ball and having the CCR divers do extended time on the wreck.

Come see what everyone is talking about. The Speigel Grove is one of those wrecks you can’t get enough of.

The USCG Duane is a 329-foot cutter that was decommissioned on August 1st, 1985, as the oldest active U.S. military vessel. The ship was intentionally sunk on November 27, 1987, to create an artificial reef.

This ship was sunk deep down to ensure that it would not conflict with navigation in the area. The Duane lies outside of the reef line and can have a ripping current. Because of its deep depth and strong currents this is a dive for advanced SCUBA divers with wreck-diving experience.

This wreck is even more impressive because the waters are so clear that visibility is often 100 feet. It is closer to the Gulfstream than most wrecks and reefs and some very large fish such as barracuda, amberjack, and cobia are often spotted swimming around the wreck.

But due to its proximity to the Gulfstream it is prone to have very swift currents. Often the wreck is un-diveable due to the current conditions.

The Eagle is a freighter that was obtained by the Eagle Tire Company after a fire rendered it no longer useful for cargo transport. Islamorada dive shops and tourism interests worked together to have the Eagle become an artificial reef and popular dive spot off Lower Matecumbe Key. The ship was cleaned and holes blasted in the sides before it was sunk in 1985.

The ship settled in 110 feet of water on her starboard side. A hurricane in 1998 broke the ship in half. Mooring buoys are located at its bow and stern. Divers should descend on anchor lines as the current can be quite strong. A smokestack, crow’s nest and mast are all intact. Because its profile reaches 40 feet and there is great visibility, divers will need to descend only 65 feet to reach the ship. The entire ship can be seen at a range of 65-100 feet.

There are several places where advanced wreck divers can penetrate the ship. It is generally well-lit, and divers report seeing amberjacks, grunts, silversides, cobia, jewfish, and nurse sharks. The masses of coral that have grown on the ship are well-developed. Spiny oysters and sponges abound.